In Switzerland, refugees are often isolated and housed in old fall-out bunkers all over the country. There is, of course, no sunlight and people are exposed to constant harassment by the authorities. Frida Frey spoke to one of thirteen illegalised refugees who took into consideration, that for them to get out and be part of society is more important than complying with what the state tells them to do. He doesn’t want to be called by his real name, he prefers to be called by «something simple, like ‹illegalised refuge› or ‹refuge activist’». In March 2017, they decided to move into a derelict house in central Zurich that is owned by Credit Suisse Group AG.

Hey, can you tell me something about the house?

The house exists since one month and has another month to stay. The current owner is Credit Suisse that wants to start with the construction for a new building in a month. It’s an apartment with 4 floors and 9 flats and a garage for 10 Cars and 24 rooms.

How was the squatting?

We were a group of people, refugee and some swiss activists that wanted to support us and they helped us in communicating with the owner. During the time our swiss friends were talking with the owner, the rest of us was really panic that there could happen something bad what could have severe consequences for us. But surprisingly, all went really good and we made the deal that we could stay for two months. We just make no noise and no trash and we pay for water and electricity. It’s the 3rd house we try, so we are really happy that it worked out.

Why do they tear down the house?

Because the house was left abandoned for a long time, there is now one mould-infested flat. Therefore the whole house has to be destroyed.

Who is living in the house?

We are refugees from different camps, all of them illegalised. We tried to invite other people to the house but most of them are afraid to loose the little they have back in the camps. Until now there are about 13 people.

How does it come that the group of people living in the house at the moment squatted this house together?

For this group, squatting the house is a reaction to the repression in the camps. The conditions in the camps are not for human beings. It makes the people look for other places where they can live in society. Having a place to stay in society is a basic thing for human beings. So we see the empty, abandoned and trashed houses in Zurich, so why not live there? Why not live there instead of the bunkers, where you live like in a prison, where you don’t have a place to act and revolt for our freedom? Better to have a squat for a short time and with an unsure situation than to live in a bunker. Better than always being controlled by the police and forced to sign for your presence every day. Better than always feel pushed by the police to leave Switzerland. Squatting a house opens rooms for discussions with other people. Now they can see you, they can talk with you, it makes you visible.

Why was it important for you to squat the house by yourself?

On the one side, it’s important to «sign the name of the refugees» on the houses. It makes us visible, it makes us present. On the other side its important, that white, swiss privileged people support us. People that talk good german, that can talk with the police and with the owner of the house. Sometimes I think to squat a house alone. 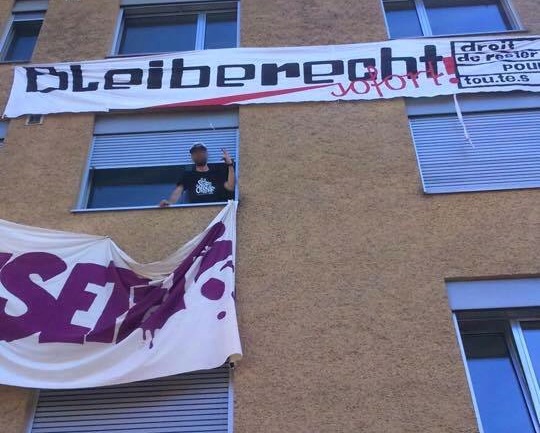 Why is there a relation between the squatter-movement and the refugees?

We have one enemy together, the same repression. So why not fight together. At this moment, the people realize the way how we would like support. For example, a lot of people want to support refugees with german classes, food, cloths. That’s also important, but refugees need a place and a society. That’s what we need. I had the impression that some anarchist people in Zurich shared our analysis about the repression we are living in. We found the basis for the repression in the camp structure. So taking the people out of the camps becomes a goal to fight repression. Because you know, the goal, how to keep on and not to be a refugee anymore, is always in the head. It’s impossible to stay without moving, without doing anything.

What’s the goal of the squat?

The house gives the room to struggle, the room to build society. This is important. Refugees often look for quick solutions to escape the situation. This is understandable. But for a long-term solution, you have to fight for it in a political way. How can you think about what you want under the repression and machine of the camps, dealing with penalties and punishment every day?

So can you tell me a bit about your situation?

I travelled through many countries and risk my life to find a place, where I can live. As an atheist muslim I came to this land with the perspective to live in freedom of thinking. But Switzerland destroyed my freedom of movement and tried to destroy my freedom of thinking. They arrested me everywhere where I was, they’ve put me in a bunker together with 80 other persons, to share my bedroom with 20. Where I have to sign twice a day to get my 8.- to live. Where I have to see the same faces of the people from the ORS every day that reminds you that the police could come anytime to kick you out. How can a society that refers on human rights isolate migrants this way and take away all the dignity and respect?
The ORS is one of the organisations that is in charge of the «supervision and organisation» of the asylum camps.

How about your freedom of thinking?

I am thinking all the time about the conditions how we live. How can I get back my freedom? My freedom in the society? As I said, as an atheist Muslim, I came to this land, hoping to live in freedom of thinking. I will not be stopped by racist laws enacted by the Security Department governed by Mr. Mario Fehr. For example I also refuse to prove that I’m an atheist to SEM (Staatssekretariat für Migration, Anm d Red) in order to reciedve a permit or an Ausweis that they can take away as easily as they can give it to me.

Mario Fehr, director of the security department, recently intensified the regulation for refugees in Zurich. So since March the refugees have to sleep in the underground Bunkers every night if they want to get the emergency assistance that contains the daily 7.-/8.-

How can you fight?

I don’t have any support for the moment, just this squatted house. And a strong heart with courage to continue in my way and work on my perspective for the future. If you are interested to get involved on a real fight with refugees, not with Deutschkurs (and if you say that the language is the key I tell you my freedom of movement is the key for me) or sports juggling with refugees (sorry, we run every day from the police, so there is no need for it)…

So when people ask, what can we do to support you?

I tell you: fight with me against the camps system. My concern is that more than 800 refugees are still staying in different camps: Kemptthal, Uster, Kloten, Adliswil, Hinteregg and my shitty bunker Urdorf. These are people who hate to stay in those camps, without a right to work or to go outside the assigned to them area, but they don’t know what they can do about. I hope that someone will read this text and decide to go visit those camps. That would be a great thing to do! Break the isolation. Bring everything stupid you don’t need to our new home squat because everything is good for an empty house. We want to be able to move so we need the possibility to use public transport, cars, bicycles. Think out of the bureaucratic categories and go for the real needs of the people. Be part of my fight. 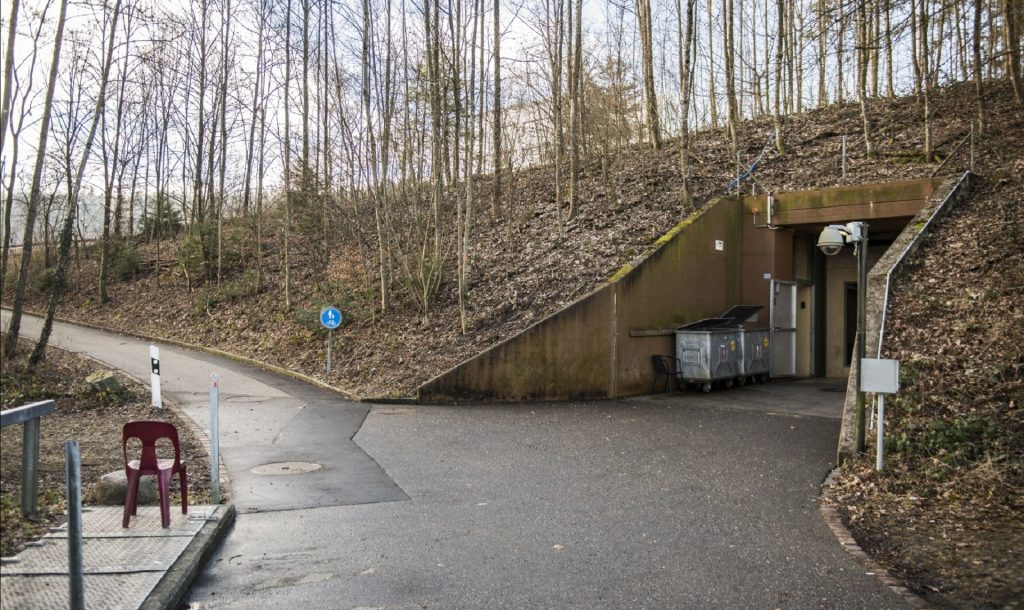 There are 7 NUK (Notunterkünfte) in Zurich. You find them in Adliswil, Embrach, Hinteregg, Kemptthal, Kloten, Urdorf and Uster. Picture of NUK Urdorf: THOMAS EGLI

Our friend is one of many refugees who have hope for the future and want to build a better world. But for him the request of residence was frequently answered negative by the SEM (State Secretariat for Migration).
Credit Suisse allowed for the refugees to stay in the house until the construction works begin.

You will find the Squat at Klosbachstrasse 50 in 8032 Zürich. 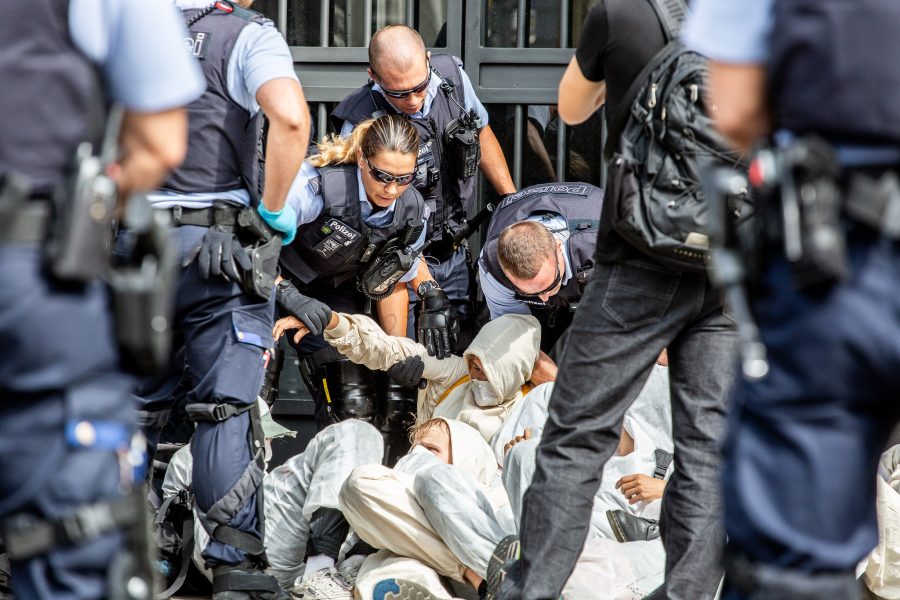 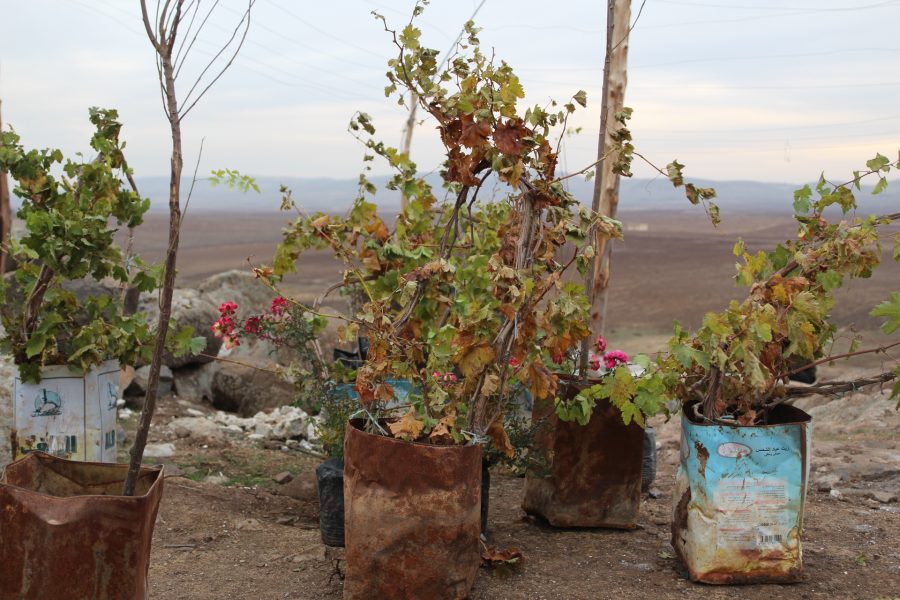